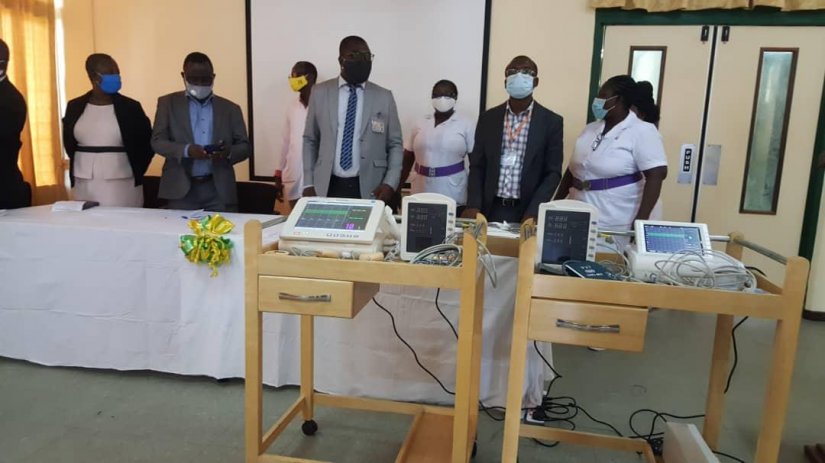 Cape Coast, May 06, GNA – Efforts to reduce maternal and neonatal deaths at the Cape Coast Teaching Hospital (CCTH) has received a major boost with the donation of five cardiotocographs (CTG) machines fitted with monitors by the JAVA Moore Foundation of the USA.

The CTG Machines is one-stop-shop equipment designed to screen and monitor the uterine contraction and fetal heartbeat of expectant mothers and their fetuses respectively for the early detection of any possible danger sign to ensure the safety of both mother and baby.

This is to help prevent the high level of neonatal and maternal deaths in the Facility.

A similar donation was also made at the University of Cape Coast Hospital where Management had received two of the machines.

Dr. Daniel Asare, Chief Executive Officer (CEO) of Korle Bu Teaching Hospital who is also the Country Representative of the JAVA Foundation, expressed dismay that within the last decade, all the major health institutions in the country had been battling the curbing of maternal and neonatal deaths despite several interventions put in place to stem the phenomenon.

It is reported that the CCTH had among other measures instituted policies whereby expectant and new mothers are provided with nurses solely responsible for their nursing care in addition to effective collaboration of medical doctors, nurses, and midwives for direct patient care all to avert mortalities among this group.

Dr. Asare said the country’s health institutions were at the war front of combating the COVID-19 pandemic but could not afford the danger to relegate maternal and child health welfare to the background until the pandemic was over, stressing that the battle against maternal and neonatal mortalities must be won at all cost.

He said the usage of that technology when well maximized could significantly reduce the rampant deaths among expectant mothers and babies which the Foundation hoped to achieve in the Country, adding that “every investment made on maternal and neonatal care is worth it”.

Dr. Asare called for an impact assessment of the machines by the hospital which he indicated would determine the significance of the equipment in the fight against the mortalities to chart the way forward.

Dr. Eric Kofi Ngyedu, CEO of CCTH who received the Machines enumerated a number of policies put in place to reduce the phenomenon which had been an albatross hanging on many health institutions in the country and expressed gratitude to the JAVA Foundation for the gesture.

He said it will facilitate the delivery of quality care among mothers and their babies and hoped it will achieve the desired impact.

Sorry, the comment form is closed at this time.

The information on this site is not intended or implied to be a substitute for professional medical advice, diagnosis or treatment. All content, including text, graphics, images and information, contained on or available through this web site is for general information purposes only.